BlueWise Marine teams up with Water Safety Ireland to raise awareness on safety at our beaches using a new technology called the MELOA WAVY Drifter. 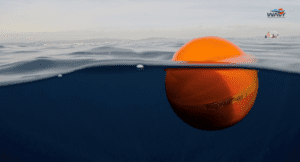 The MELOA WAVY Drifter is a new ocean surface drifter that resists the harsh environment of breaking waves, tracking the motion of the water as it is carried by waves and currents, such as the infamous rip currents. These currents extend from beaches offshore and often carry swimmers and beachgoers into dangerous situations where they are out of their depth and in an increased risk of drowning.
BlueWise Marine and Water Safety Ireland will be at Lahinch Beach, Co Clare, on Saturday the 18th of September from 10 am – 12 noon for a demonstration session on water safety using the MELOA WAVY Drifters to make rip currents more visible. 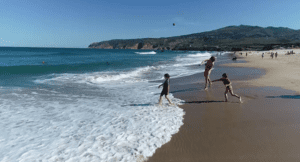 The MELOA WAVY Drifter is ideally suited for citizen engagement at the beach with its ability to visually present the effects of rip currents, and other nearshore currents, and thus helping to raise awareness of safety at the beach. It is very small (smaller than a handball) and light (750g), making demonstrations extremely easy to perform. It is brightly coloured, for increased visibility at sea, and can also transmit positional data in real-time to an app that runs on smartphones and to a data repository stored on the cloud.

“When the MELOA project started designing and producing these drifters, one of the top design requirements was to come up with something that could be easily deployed from the shore and help visualise the ocean circulation at the beach. Too many examples make us all sadly aware of how deceptive some currents caused by waves can be, and the dangers they may pose to our citizens. Special care was therefore placed in the production of a “beach-going” drifter with the citizen in mind.

We at BlueWise Marine, and all the other partners in this project, are thus very excited with the opportunity to team up with Water Safety Ireland in this demonstration of the new MELOA WAVY Drifter which, we hope, will contribute to the goal of preventing casualties at our beaches.”

John Leech, CEO of Water Safety Ireland, “commends BlueWise Marine for this innovative use of technology to contribute towards drowning prevention on our beaches and in particular in regard to the inherent risk of rip currents which exist on so many of our beaches. Lifeguards can only assist the public during the bathing season, so it is essential that the public understands and learns about rip currents. They will then be able to take action to initially recognise them on arrival at a beach and know how to swim parallel to the shore to escape from them.”

According to Water Safety Ireland’s drowning figures for 2020, 76 people drowned in 2020. 44 of these were accidental drownings. Drowning deaths occur when people pulled offshore are unable to keep themselves afloat and swim to shore. This may be due to any combination of fear, panic, exhaustion, or lack of swimming skills. To avoid this, it’s important we are aware of rip currents.

The talk and demonstration on Saturday will help people to identify rip currents and learn more about them to stay safe when on or near waterways.

BlueWise Marine specialises in providing infrastructure, project, marketing and funding support services for marine and offshore renewable energy projects and initiatives. We work with government, industry and academic clients, in partnership with local communities. Our end-to-end approach to service delivery allows our clients to focus on their core business, safe in the knowledge that our team will manage their assets and projects to the highest standards, in a safe, efficient, social and environmentally conscious manner. BlueWise Marine is a MELOA project partner.

The MELOA WAVY Drifter is a new ocean surface drifter developed in the EU funded project MELOA (Grant Agreement no. 776825), of which BlueWise Marine is a partner. The project developed a family of ocean surface drifters to measure currents and waves in different scenarios. The WAVY Drifter to be used in this demonstration in Lahinch is the ‘WAVY Littoral’, which was specially designed for short-term (up to three days) studies of nearshore and littoral circulation and is suited for citizen science and engagement. More information on the project can be found at https://www.ec-meloa.eu

Water Safety Ireland is the statutory, voluntary body and registered charity established to promote water safety and reduce drownings in Ireland. Their focus is on public awareness and education. Tragically, an average of 115 people drown in Ireland each year, eleven every month. They strive to reduce these fatalities by increasing water safety awareness and by changing attitudes and behaviours so that our aquatic environments can be enjoyed with confidence and safety.

about our new services.

You can unsubscribe any time. View our Privacy Statement here.